I have a mystery for you this week. There is some fairly compelling evidence to suggest that Jiminy the cricket is guilty, but we’ve all been in the wrong place at the wrong time! I’ll tell you about it and let you decide.

It all began last summer, the female biped was training the wisteria to form a fan shape in the corner of the garden. The growing shoots kept getting eaten and there was always a cricket nearby. She said that she knew it was the same cricket because one of his back legs was missing. She named him Jiminy! 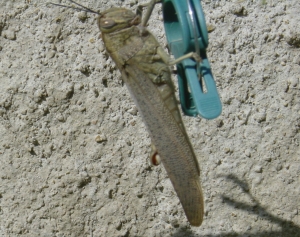 The biped went and looked at the wisteria most days and clipped the new growth into the position she wanted. I would usually stroll around and sniff at more interesting things while she did this. Sometimes I would go and check on what she was doing and she would show me another chewed shoot and say that Jiminy had been busy again. He was usually nearby and he would stare at us from behind a leaf, as though we couldn’t see him.

The male biped asked her why she didn’t shoo the cricket away. She explained that Jiminy had a back leg missing and might not survive somewhere else. The male laughed and said that there was obviously no other option than to allow Jiminy to feed on succulent wisteria shoots.

A day or two later we went outside and found Jiminy right next to a chewed shoot. He was hiding behind one of the plant clips looking very guilty. Here is the photograph.

Jiminy next to a chewed wisteria shoot

Now it’s time for you to decide and cast your vote. Jiminy was always near the chewed shoots, but he was never actually caught with one in his mouth. He could be as innocent as a dog who just happens to be near an overturned rubbish bin or a cat next to an empty goldfish bowl – you decide!

The wisteria has been growing like a weed since then and the photograph below shows it in flower this Spring. It produces enough shoots to keep Jiminy and quite a few of his friends very well fed.

Wisteria in flower this Spring