I’m going to be barking about barking again today. It seems that a number of dogs are keeping their bipeds awake at night, so I’m going to answer the Frequently Barked Question: How can I stop my Pyrenean Mountain Dog (or Great Pyrenees) from barking at night?

I will explain how I came to an agreement with my bipeds about the things that need barking at in the night. I live indoors as a member of the family, things are different for a dog working and sleeping outside.

When I was a puppy I didn’t bark at all until I started to mature and I discovered my protective instincts. I have explained this in “The calm before the barking storm“.

My bipeds worked with me on controlling barking in the daytime first. I have explained how we did that in “To bark, or not to bark, that is the question“.

During this time I slept in the kitchen where I couldn’t see or hear very much of what was going on outside. The kitchen was at the back of the house and the curtains were drawn at night.

They also made sure that I was tired and ready to sleep when I went to bed. They achieved this with plenty of exercise and mentally stimulating activities.

They also continued to socialise me and give me new experiences.

Sometimes they would sit outside quietly with me after dark so that I could listen to what was going on outside. I also got some late strolls in our village. This way I learnt some of the normal sounds that happen after it’s dark.

When I responded well to being told to stop barking in the daytime, they said that I could choose where to sleep. I had been asking to sleep in the hall where I could keep an eye on the whole household easily, so I was thrilled to be allowed to at last!

For a few nights I noticed different things to bark at. When I barked one of my bipeds would get up and check what I was barking about and ask me to be quiet, just as they had in the daytime. It didn’t take many nights for me to learn that my bipeds weren’t interested in hearing that one of our neighbours had come home late or that there was a hedgehog outside.

My bipeds did lose some sleep at first, but now they can sleep soundly knowing that I will alert them on the rare occasion when there really is something to worry about. They know that I don’t wake them unless it is necessary for them to check what it going on. 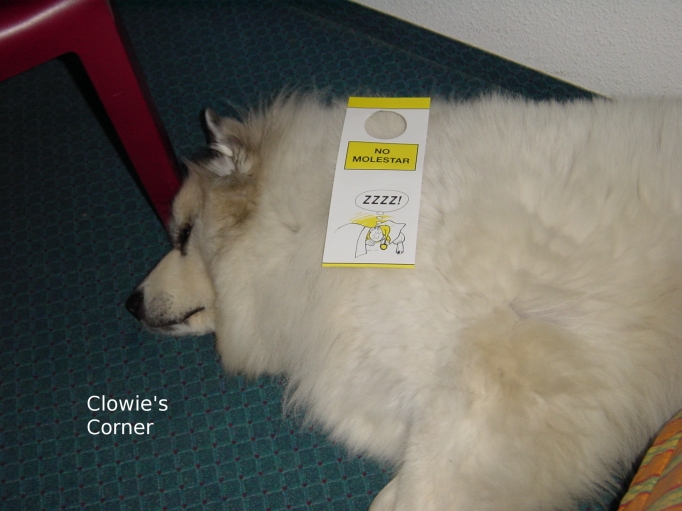 It amazes my bipeds that I can sleep through all kinds of usual sounds, but suddenly be alert and on my paws at the slightest unusual sound. It doesn’t amaze me, this is a skill that my ancestors have been honing for centuries in order to protect what is important to us!

This is a Frequently Barked Question.

FBQ: How do I stop my Pyrenean Mountain Dog from barking?

Clowie: All dogs bark and there can be lots of different reasons for barking. The most common reasons are anxiety, boredom, excitement, or a perceived threat. Everyone has their own ideas about how much barking is acceptable, but most of us have neighbours and have to control our urge to bark sometimes. As it’s such a big topic, I am going to concentrate on my main reason for barking and how I trained my bipeds to understand me, so that I need to bark less.