I was really excited when my bipeds took me to Devon with them for a holiday. We stayed in a cottage that was close to the South West Coast Path and most days we went out and walked a different section of the path. We explored some wonderful beaches!

I thought I was quite an expert on stiles and kissing gates. I already knew that I can get through some kissing gates and that it usually means a nice reward. I had also seen stiles of different shapes and sizes and I knew it’s usually difficult for large dogs to use a footpath unless there is an alternative to the stile – I told you about one of those last week.

So I was surprised to discover a type of stile I’d never come across before. At first it looked just like any other stile, but then I noticed it had what looked like a large cat flap at the side. I couldn’t believe it when I heard the male biped say it was a dog door! It didn’t look very big at all. 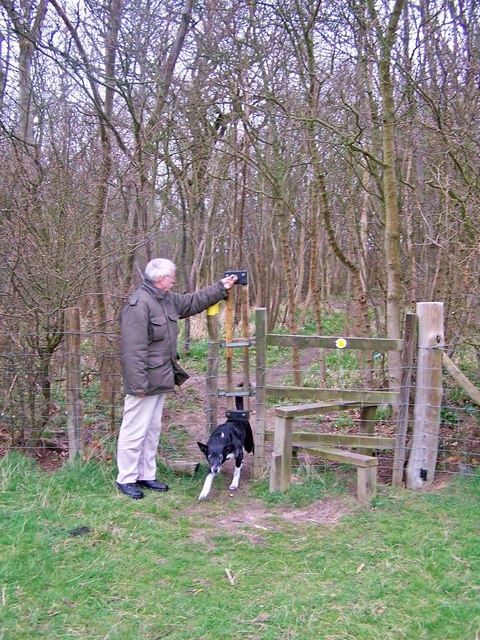 This photograph of one in Kent shows how a dog door works.
Attribution:
Richard Dorrell [CC-BY-SA-2.0], via Wikimedia Commons

The male biped raised the door. It wouldn’t lift very far. My bipeds said it was about the right size for a Border Collie to walk through, but the Collie would bump his head if he didn’t duck! They looked at the size of the gap created and then the female biped climbed over the stile, leaving me with the male biped.

The male biped asked me to get into the “down” position really close to the door. The female biped bent down on the other side of the door and asked me to “crawl”. I edged forward a little and then I stopped because I would be in the gap if I continued. The female biped urged me to “crawl” again and encouraged me through the gap. When I was through she told me I could get up and gave me a tasty treat and a cuddle.

The male biped was busy singing “I’m Gonna Crawl” (Led Zeppelin). He looked hilarious standing on the top of the stile singing and playing air guitar in the pouring rain!

We encountered many stiles with dog doors after that. The doors varied in size but most of them were larger than that first one. I got quicker and quicker at wriggling my way through them. The female biped said that was because I didn’t want to listen to the song again, but that’s silly because I love it when my bipeds sing! I had thought that crawling was just a trick I did to get treats, but it can be just as useful as walking backwards!

We saw some beautiful places, but my bipeds didn’t take any photographs on that holiday. Each day they said it wasn’t worth taking the camera out with us as it was raining so hard. They said the weather was bound to be better the next day, but we didn’t get any days without heavy rain. I don’t know what else they expected in the Springtime! I’ve found some photographs on Wikimedia Commons of some of the places I saw – it looks like other people have had better luck with the weather than we did. It’s a good thing I enjoy getting wet! 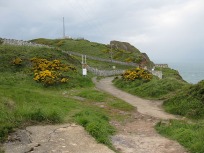 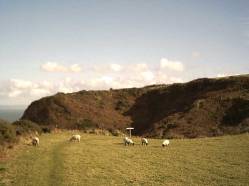 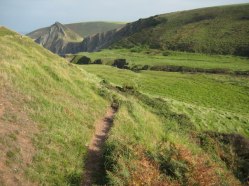 Another view of the path at Speke’s Mill Mouth Attribution: Philip Halling [CC-BY-SA-2.0], via Wikimedia Commons