When I was a puppy I would bounce like Tigger from “Winnie-the-Pooh” when I was excited. This sounds cute, but it can be difficult for the biped on the other end of the lead when the puppy is large. My bipeds usually asked me to “sit” and we would wait until I had calmed down before walking on, but this is about an occasion when that wasn’t feasible.

Tigger and friends
These are the real stuffed toys owned by Christopher Robin and featured in the Winnie-the-Pooh stories. Clockwise from bottom left: Tigger, Kanga, Edward Bear (aka Winnie-the-Pooh), Eeyore, and Piglet. They are on display in the Donnell Library Center in New York City.

At the time of this tale, I was about seven months old and weighed a little over a hundred pounds. I was nearing the end of a walk with the female biped when I started to get excited because I could hear some strange noises. She talked to me and walked a little faster to keep my attention. When we turned a corner in the track there were a few men on the track and one of them shouted out, “Wait! Someone on the path!”

There was an open field to our left and the track went along the edge of it. On the other side of the field there was a line of about fifteen men with guns and each had a dog sitting at his side. They were all staring in our direction! I wanted to go and play with the dogs, so I started bouncing like Tigger.

My biped told me to “walk nicely” and tried to hurry me along the track. I bounced higher and kept pulling in the direction of the other dogs. I was sure that they would want to come and play, but they didn’t move even though most of them weren’t on leads – they sat there like statues! I was sure they’d like to have fun with me though, so I treated them to some of my most spectacular bouncing!

We had to walk a few hundred yards along the edge of the field. I managed to pull my biped a few yards into the field a couple of times, nearly pulling her over. She still had hold of my lead, but then she also held onto my shoulders with both hands to keep some control of me. She made me walk as quickly as she could and kept me pointing in the direction she wanted to go. She breathed a sigh of relief when we reached the end of the field and turned a corner in the track. I calmed down a bit, but I kept trying to turn and go back to play with the dogs. We hadn’t gone far before one of the men shouted, “All clear!”

A few moments later we heard some loud bangs from the direction of the field. I again tried to turn back so that I could play with the dogs, but my biped said that they were busy working.

My biped seemed very tired when we got home and she complained that I’d almost pulled her shoulders out of their sockets! She also said that she hadn’t realised that the pheasant shooting had started and that we wouldn’t be walking that way on days when they were having a shoot. 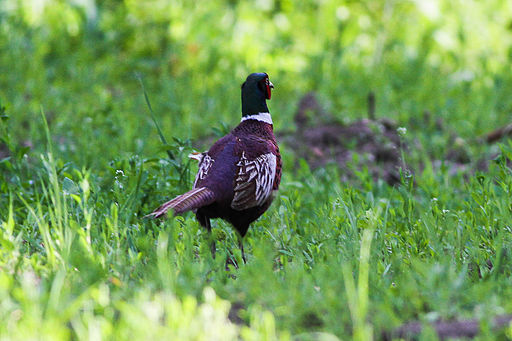