Before I tell you this week’s tale, I want to tell you about two cats that need homes.

Leo has been nursed back to health by Savannah and her family. He now needs a home of his own in the California area. So head on over to Savannah’s Paw Tracks and read about him. He has a special page on Savannah’s blog explaining what he needs from the people who care for him. 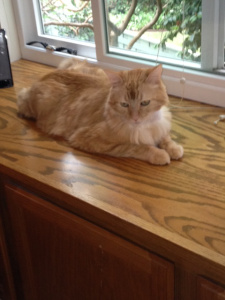 Leo, in need of a home

Basil, in Yorkshire, England, is still looking for a home for a young cat called Mary – more information here.

One of the very first things that one of my bipeds taught me as a puppy was to sit. She held a treat close to my nose and, before I could take it, she lifted her hand slightly and moved it above my head. My nose was following the treat and, as I tilted my head back, I sat. She gave me the treat and told me how clever I was. This was such an easy way to get a treat!

We repeated this quite a few times over the next few days. When she could tell I knew what she was going to do and what I needed to do to get the treat, she added the word ‘sit’. I soon remembered the word because I liked the treats. I then began learning lots of other things, but every training session started and ended with a sit. I was also asked to sit at odd times during the day. I didn’t get a treat every time, sometimes I was given a fuss or we played a game for a few minutes. But I always knew it would be worth my while to do as asked, they seemed to like sit a lot.

I decided I could use this to my advantage. When I wanted something I would sit. They told me I was very good and encouraged me to do this. I soon discovered that when I heard them say ‘sit’ to me I no longer had to consider whether I should comply or not – it was always worth it! It became an automatic response, my bottom would hit the deck before the thought had registered in my brain.

But now I come to the downside of sitting so readily. This is a warning to any puppies reading this – make sure that the rewards are worth it because there will be things it stops you from doing.

If only we hadn’t been asked to sit!
(From guzer.com)

I told you last week about when I was trying to chase some goats – I was asked to sit and I didn’t get to chase them very far. I’ll give you a few other examples of things I haven’t been able to do because I was asked to sit. If I’ve ever been on my way across the kitchen to investigate what’s on the counter, I hear “Clowie, sit!” before I can get there. It’s the same story when visitors arrive, “Clowie, sit!” – how’s a dog to give bipeds a proper greeting while sitting? It’s impossible to leap all over them and lick their faces! If they’ve left the front door open while they’re bringing in some shopping and it occurs to me it would be nice to pop out and investigate – yes, you’ve guessed, “Clowie, sit!”

One day, just after I’d been asked to sit when there was something exciting to do, I heard one of my bipeds say, “Isn’t ‘sit’ wonderful? There isn’t much mischief a puppy can get into while sitting!”

That was obviously their cunning plan all along! They have used ‘sit’ to modify my behaviour. But I have also worked it to my advantage. I have perfected a really pretty sit that they find very hard to resist. When I hear them open the fridge door, I can get there from anywhere in the house in less than five seconds. I’m usually right behind them, in my pretty sit, before they can close the door again. I don’t always get something, but sometimes I do and there’s never any harm in asking! My lead hangs on a hook and if I sit with my nose touching the lead, I usually get a walk. I think it’s worked out fairly well.

P.S. If you were wondering about the title, there’s a saying “a stitch in time saves nine” and it means that a timely effort will prevent more work later.