I’m going to answer that question and tell you about a rather strange door.

This incident happened soon after we’d moved into an old, stone house. There was an open fire in the kitchen which smoked badly if the kitchen door was closed. After they’d had to open all the windows to let the smoke out a couple of times, my bipeds decided to leave the door ajar when the fire was lit.

That’s the first answer to the question in the title – when it’s ajar (sounds like a jar)! There’s a better answer later!

It looked as though someone had tried to solve the problem of the smoking fire by making a hole in the door to allow air to flow through. They had covered the hole in the door with a metal grille on each side. It didn’t stop the fire smoking when the door was closed, but it did make the door very ugly! 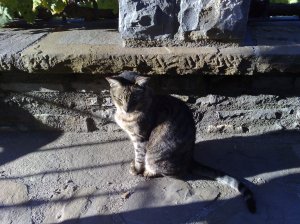 One morning the cats were showing a lot of interest in this hole in the door. Pippin was sitting on one side of the door with his nose pressed against the grille and Mulberry was on the other side of the door in the same position. Even when the female biped mentioned breakfast, they didn’t move a muscle. She got down on her knees and peered at the door, but she couldn’t see anything. The cats stayed where they were. 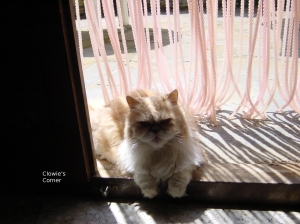 They had almost finished when the male biped exclaimed, “There’s a mouse!” 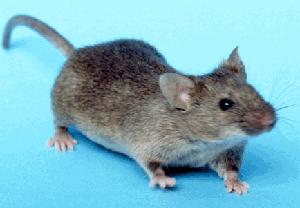 He then explained that he’d seen a mouse briefly appear and poke its nose through the grille to see if it was safe to come out. The mouse had decided it was safer to stay inside the door.

If only the bipeds had used their noses, they would have known there was a mouse there much sooner!

Here’s the second answer to the question: When is a door not a door? When it’s a mouse’s house!

The female biped was not enthusiastic about the idea of a mouse on the loose in the kitchen, but the bipeds hadn’t finished unpacking and couldn’t remember where they’d packed the mousetraps. It was a Sunday so the local shops wouldn’t be open to buy new ones. The male biped said he had an idea.

Pippin doesn’t think I should tell you the rest of the tale, he says he may never speak to me again if I do. That was a worrying reaction so I had a chat with Mulberry and asked him what he thought. He said that he (Mulberry) was concerned when I told the tale of his scary encounter with a chair, but everyone was sympathetic to his plight and he needn’t have worried at all. He said he was sure that Pippin would enjoy being the focus of attention.

So I’ll tell you about the male biped’s cunning plan and the part that Pippin played in it another time!