Mulberry, the cat, likes to take some exercise most days. He runs as fast as he can in one direction, when he runs out of room he jumps and spins and runs in another direction. When he’s feeling adventurous he likes to pretend he’s a ninja cat and he bounces against something to change direction.

Mulberry, relaxing in the doorway to the terrace

There used to be some plastic garden chairs left on the terrace and he would sometimes bounce off those. Then one day he discovered that if he jumped against the back of the chair he could knock it over. He thought that was great fun!

He played this a few times and then one day we heard a chair fall over and then there was a terrible wailing noise. I have never heard such a loud noise come from a cat! I leapt to my paws to go and see what was wrong. The female biped hurried out onto the terrace and I followed her.

She went across to where Mulberry appeared to be fighting a chair. She spoke to him in a soothing voice to tell him she was there and then she bent down and held him by the shoulders, saying, “Keep still!” 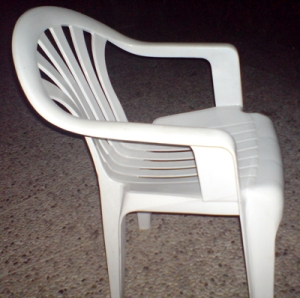 Mulberry stopped struggling and he turned the volume down a little. His leg was caught in one of the gaps in the back of the chair. The biped felt his leg and tried to slide it up to where the gap was wider, but that made Mulberry wail very loudly again so she stopped.

The male biped had been getting the car out, but he’d heard the racket that Mulberry was making and returned.

“What’s that noise? What’s happened?” he wanted to know.

The female biped explained that Mulberry’s leg was stuck and how she’d tried to move it, but she was worried about harming Mulberry. He nodded and started pushing and pulling at the back of one of the other chairs. I waited a moment. He must surely see his mistake! He didn’t, so I nudged him gently to get his attention and looked towards the chair that was the problem.

He patted me and said, “Thank you, Clowie. Do you think I should try this on Mulberry’s chair?”

He told the other biped that he was going to flex one slat forwards and one slat back and she should try to slide Mulberry’s leg again. Mulberry gave one of his loudest wails, but his leg was free! The biped held onto him, looked at his leg, and then put him down gently. He disappeared as fast as his legs would carry him!

They left Mulberry to calm down for a little while and then rattled the treat container and called him. He was pleased to get a cuddle and the bipeds checked his leg more thoroughly. The chair had done Mulberry no real harm.

The bipeds made up a little song that they kept singing for weeks.

They took inspiration from the chorus of this song. It’s the sort of tune that sticks in your head for the day!

Mulberry wouldn’t go near those garden chairs after that, but he isn’t scared of any other chairs!

These chairs are much safer!